The Cost of Living in Hawai'i:

The Price of Paradise

When I tell people that I moved from Hawaii to the mainland, the most common response I get is the question:  “Why did you leave?”

My answer—bathed in trademark Hawaiian humor—is:  “Hawaii is a great place to spend the money you made someplace else…”

The Price of Paradise

While there is a level of casual humility in that statement, the bold truth is Hawaii is an expensive place to live.  Groceries cost more: on average 30-50% more than the mainland.  And while you could buy local produce, 80% of the milk sold in Hawaii still ships in from the mainland (as told in the Hawaii News Now link, above).  Yes, despite fertile volcanic soil, consistently forgiving weather, and a handful of quality local farms Hawaii still imports most of its produce (approximately 80-90% according to 2012 statistics provided by hawaii.gov).

This fact definitely staggers inquisitors, but the heavy reality of the total cost of living really sheds light on the difficulties facing Hawaiian residents.  For example, home prices tend to be an average of 40% higher than most mainland cities.

Obviously, if you move from a large metropolitan area like Los Angeles you may not notice as much cost of living disparity (25% increase from San Diego, CA home prices versus 80% increase from Topeka, KS according to—admittedly older—data).

In addition to higher mortgage/rent, Hawaii residents also pay more for fuel (up to $5 a gallon), a reality which becomes incessantly more annoying when you realize that traffic remains one of the biggest problems in metro areas.  As many workers live in outlying rural districts, commuting is a big part of the work day and that often finds residents stuck in hours of traffic. 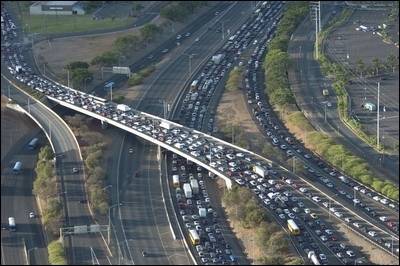 This puts strain on the bank account by way of increased fuel and maintenance cost, particularly when you note that many of Hawaii’s roads are not as forgiving as the weather.  As a matter of fact, the H1 freeway—the main thoroughfare that connects Honolulu with the West side of O’ahu—is constantly under construction and repair.

Despite a higher cost of living and other financial complications that accompany life in Hawaii, the paradise is worth the price to those who truly love island living.  As you might imagine there is a long list of reasons the Aloha state is one of the top vacation destinations in the United States.  It is pretty popular with Asian travelers too.

In fact, you would be hard pressed to find anyone impervious to its charm.  And while my honest answer to “why did you leave?” exposes a hardship overlooked by many who visit, it is still only a half-truth at best.