The Legend of Hanauma Bay

One of my favorite Hawaiian legends pertains to the history of Hanauma Bay.

My family is from Waianae, which is a prolifically “local” community on the west side of O’ahu. I, however, grew up in Washington State, but my parents made sure to send us—me and my two brothers—“home” as often as possible. Every summer, we stayed with my grandpa for a month or so, who took us to visit our favorite local and historically significant spots.

One of my favorite places to visit, as a child, is also the setting for one of my favorite Hawaiian legends: Hanauma Bay. Before I tell you the legend, though, I’ll describe for you the importance of this popular tourist spot.

Hanauma Bay Oahu is an inlet of calm water that embraces a large coral reef that is home to hundreds of different species of fish. Tourists, locals, and visitors alike flock to this location, an isolated state sanctuary on the South Side of the island, to learn more about the indigenous fish species that populate this tropical paradise. 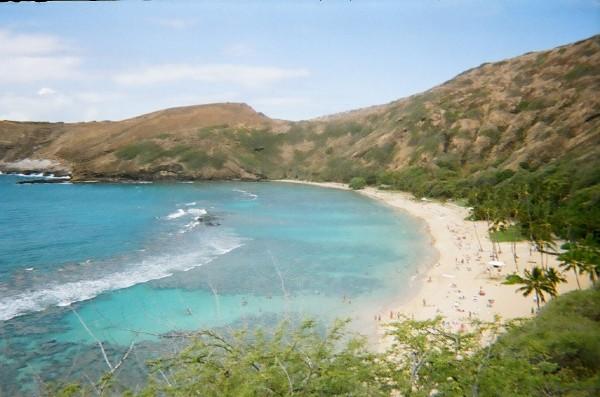 Traditionally, though, this was a location where canoes could wait for winds to die down before returning to fishing. Because of the coral reef, though, it was also a popular place for fishing.

There are several variations to the Hawaiian legends that describe the formation of this very special place. The one I know talks of a princess Keohinani, whose hair was as black as that of the fire goddess, Pele, and whose eyes held all the majesty of the fiery volcanoes of the islands. Her father was a mighty chief and protector of the existing bay.

One day two suitors approached the chief to ask for his daughter’s hand in marriage: Chief Koko and Chief Hana. She could not decide which suitor she preferred so her father commissioned an arm wrestling match with the victor winning Keohinani’s hand. The match took place at the chief’s house overlooking the water.

The two men locked wrists and, surprisingly, neither seemed to have the upper hand. They continued to strain against each other, determined to win her love. Despite minutes and hours of tension neither man would give in and eventually days passed with no result.

Keohinani loved them both and their impasse tortured her. She begged her father, who was also a magician (as many were at the time), to somehow end this standstill. At his daughter’s command, the chief went out to meet the men and ordered them to give up or face the consequences; still neither man relented and the chief turned them both into lizards, their tails still intertwined.

Various Hawaiian legends describe the next sequence of events differently but the end result is that Keohinani’s love and devotion was so powerful that the Gods intervened, hearing her prayers.

They transformed the two lizards into huge mountains and assigned them to watch over Keohinani and the bay she loved so much, Hanauma Bay. The two princes still face each other as they continue to fight for her love, their tails, now stone, still connected.