The first time I saw Chinaman's Hat was actually as fantastically depicted in the painting by artist Dean Howell.  His 1983 painting—now valued at $60,000 (with reprints available for as much as $300)—takes you under the sea where Howell reveals a giant Chinese man resting on the ocean floor, the island as his hat. 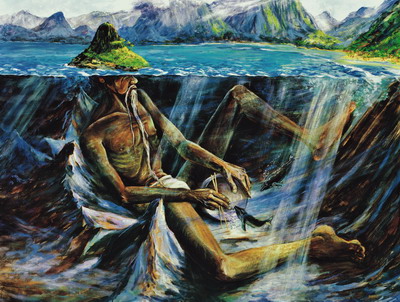 Of course, this is just an artistic interpretation, but seeing the small, uninhabited island in person—especially as a child—I wondered if such things could be true.  Having heard many other larger-than-life Hawaiian legends from my parents, I felt that surely there must be some truth to this fable. 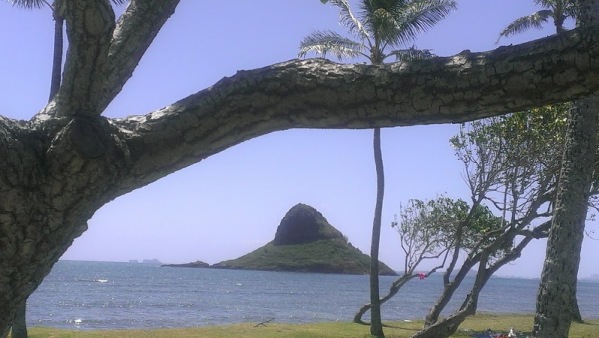 The story of Chinaman's Hat or its Hawaiian name, Mokoli'i, had nothing to do with a Chinese man or his hat, but a lizard and his back. As I have come to understand it, this story tells of the time Pele’s sister, Hi'iaka, slew a giant lizard and threw its tail into the ocean, just off the wayward shore. The island of Mokoli'i remains a remnant of the lizard’s back, poking through the water.

Even though I only recently learned of this story, the imagery takes me back to when I was twelve years old and first heard the legend of Hanauma Bay--which also refers to lizards--and never saw that bay the same way again.

When you encounter the island in real life, though, it is still nearly as fantastical as its Hawaiian legends might lend.  Located on the Windward side of Oahu, just North of Kaneohe, the tiny basalt islet of Mokoli'i is easily visible from the main shore, particularly from the Kualoa mountain range.

In fact, at only 1,477 feet from Kualoa park, it is so close that you could walk there quickly when the tide is low enough.  Most adventurers paddle a canoe or kayak to it.  Some even paddle over on a surfboard.

Sanctuary for Native Birds and Fish

The island is home to one species of native bird, the Wedge-tailed Shearwater, also called ua'u kani (moaning petrel). Along with this native bird species, the isle of Mokoli'i boasts several sea caves and even a couple lovely—and secluded—beaches.

Obviously, since the island is so close to the main shore you will find quite a bit of coral reef, which makes for great diving to look at the several dozen different, colorful fish species native to Hawaii.  The peak is not too high and the island is small enough that hiking is a popular activity.

My legacy carries the tradition that my parents passed on to me—summer vacations with the extended family, trips around the island, food, music, dancing, aloha—and Chinaman's Hat.

What are your memories of Chinaman's Hat?

Return to the top of "The Legendary Chinaman's Hat"

Return to the top "Lucky We Live Hawaii" Page