The Waikiki Wall separates not only the waters, but the big kids from the little kids

Growing up in Hawaii, I was lucky to enjoy beach weather all year round. I have fond memories of my grandma packing up musubis (rice balls) and taking the whole neighborhood gang to my favorite spot in Waikiki, called “Walls.” 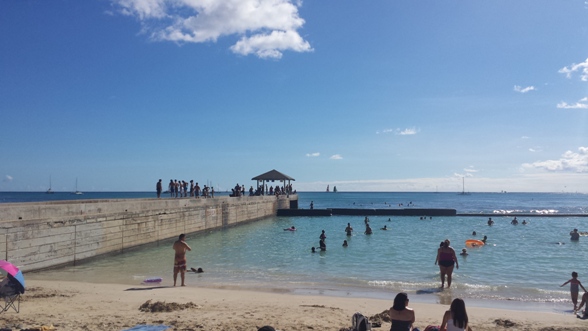 "Walls" in Waikiki on the corner of Kapahulu Ave. and Kalakaua Ave.
Photo by Cara Fasone

If you lived in Honolulu, you’re from what locals call “town.” Anywhere along  Oahu’s North Shore and beyond was “country.” Only on rare occasions, my grandma would take us on the Wahiawa Circle Island bus to swim at Turtle Bay in the country. We were “townies,” so when we felt like a beach day, we went to the much closer, Waikiki “Walls.”

It is nicknamed “Walls” by locals, because of a giant concrete walkway kids like to jump off of (there are signs saying not to). There are also walls separating the shallow waters from the bigger surf. The wall not only physically divided the waters, but separated the big kids from the little kids. Passing through the divide was like swimming to the deep end of the pool. It was a rite of passage for many townies. 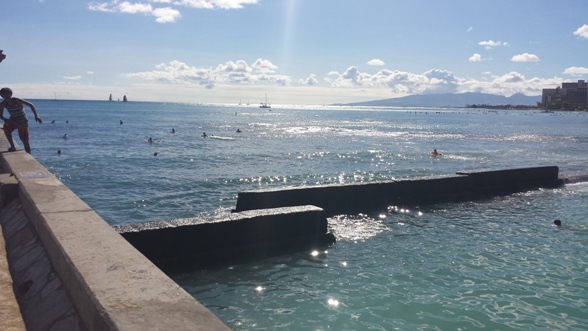 The walls block the crashing waves
Photo by Cara Fasone

Although Waikiki might seem like a tourist hangout, if you look closely, you also see the locals. When I was a small kid, I would play in the shallow water and watch the teenagers standing on top of the wall with their boogie boards and jumping over to the other side. I liked the wall because I knew it blocked the sharks and no current could pull me away; it was a safe zone. 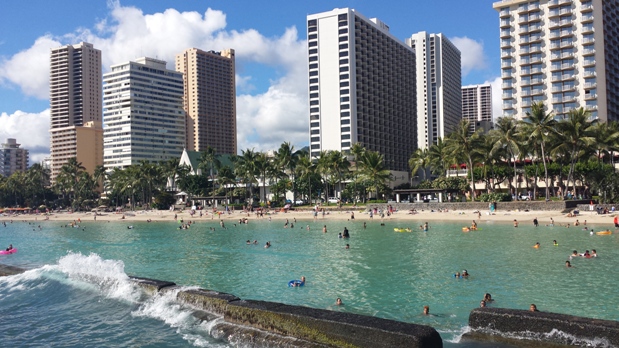 Walls is in the heart of Waikiki
Photo by Cara Fasone

One day, when I was about 9-years-old, my mom took me with her to the other side of the wall, I could feel the seaweed touching my toes as we paddled out. It scared me, I wasn’t ready.

My childhood best friend Cindy was a little more daring; she was aching to escape the concrete playpen we were in. She convinced me to swim with her to touch the wall, I was about 11-years-old by then, and my curiosity got the best of me. I remember touching the slimy moss growing on top of the concrete, and feeling its slipperiness as I climbed over.  I peeped my head over and saw the body boarders patiently waiting for waves. It was a big, endless ocean out there. 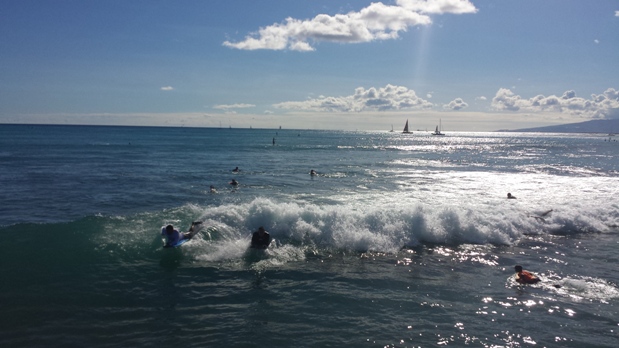 Fortunately, we made it safely back to shore. Even if it was by accident, that moment was a coming-of-age event for me. I now had a story to tell. My family moved to Mililani, the suburbs, a few years later. After that, it was much closer to drive to Haleiwa in the North Shore for beach days.

Even though I’m no longer a townie, I like cruising Waikiki and passing "Walls." It brings me back to my hanabada days  with Cindy and that day when we became big kids.

Where is your favorite childhood beach spot?

The Best Hawaiian Island for Sunsets

Return to the top of "Walls in Waikiki"

Return to the "Lucky We Live Hawaii" Page